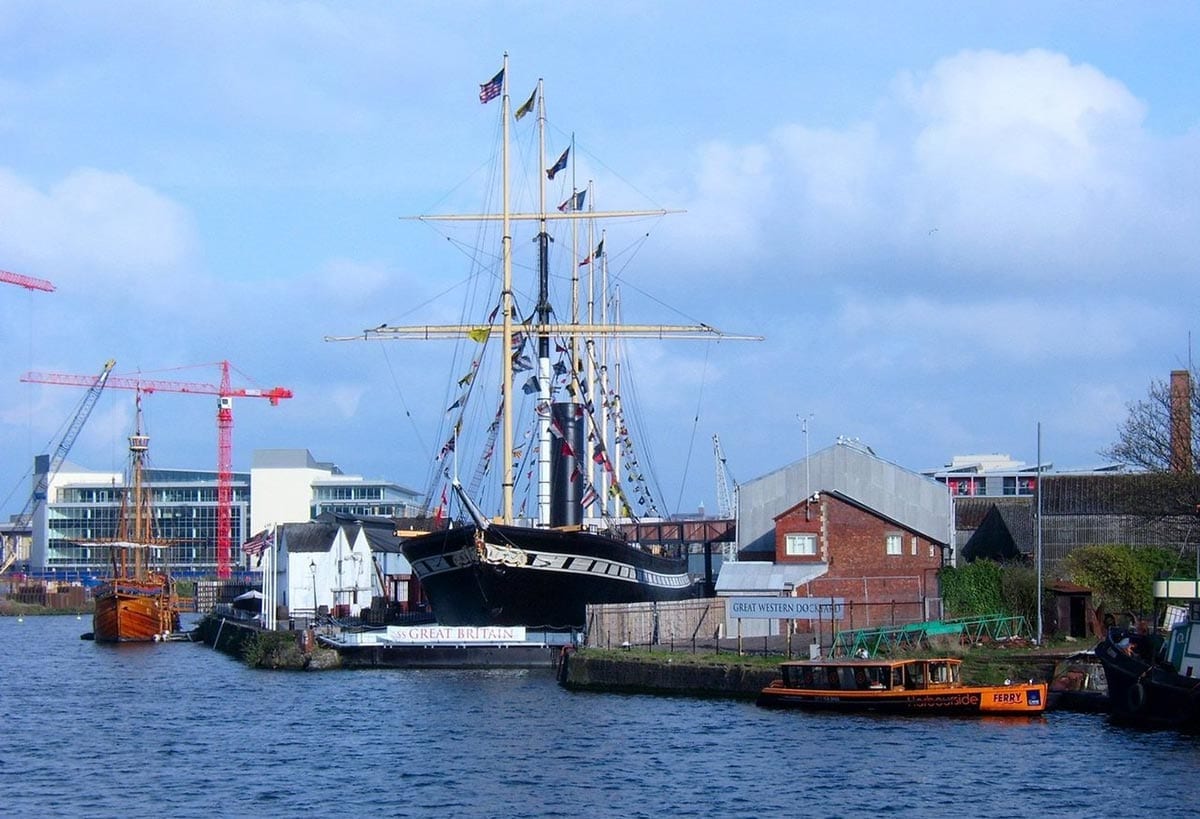 Founded on the bank of the River Avon, Bristol has a history of maritime prowess that dates back to Anglo-Saxon times.

A settlement has existed in the place that we now call Bristol since the Iron Age. Back then, the settlement drew its name from the Welsh ‘Caer Odor’, meaning ‘fort on the chasm’ – the chasm referring to its situation between the River Frome and the limestone Avon Gorges. As the centuries progressed, its Saxon name – Bricstow – evolved as a straightforward translation of this ancient name (Bric meaning break – a translation of Odor, and Stow replacing Caer). Bristol, as we can see from the evolution of its name, has always had an association with the water, and this is an association that accounts for its maritime reputation, and which is engraved on its geography, topography, and contemporary style.

The stunning gorges that helped to give Bristol its name and its identity are majestic. Taking one of Bristol’s famous hot air balloon rides over them enables you to appreciate them at their finest. Balloon trips enable you to see the limestone rock formations, and maybe one or more of the three Iron Age forts that line the Avon: the remains of which remind us of the roots of the city.

Bristol as a place of trade and exploration

Bristol has been a trading port since the 12th Century, when it would trade with Ireland. As the second most important port in the country, the shipping and maritime trade in Bristol continued to develop throughout the 15th and 16th Centuries, when Bristol was involved in trade with Iceland and France. The Venetian explorer John Cabot used Bristol as his base when he attempted to discover lands and new trading routes across the Atlantic. It was on one of these journeys, in 1497, that Cabot ‘discovered’ the aptly named New Found Land, or Newfoundland. In 1897, a 32-metre tower, known as Cabot Tower, was built on Brandon Hill in Bristol to commemorate the 400th year of this endeavour. Visitors these days are able to visit the tower for superlative views over the city. From your hot air balloon, your views will be even better. A replica of the small ship that he used for the crossing – known as the Matthew of Bristol – can usually be seen giving tourists rides around the harbour.

Bristol’s own Bandits and Robinson Crusoes

Bristol has a vibrant and colourful history as the birthplace of many a famous pirate, including the notorious Blackbeard. Sea-faring Bristolians of the 17th and 18th Century, including Alexander Selkirk who had been marooned by pirates for five years, provided inspiration to some of the world’s first novelists, such as Daniel Defoe and most notably Robert Louis Stevenson, whose Robinson Crusoe and Treasure Island novels feature characters based on some of these personalities.

As you explore the city in your hot air balloon, you too will see where some of these people once revelled in bars and alleys around a thriving harbour. Though it looks quite different now to the era of Blackbeard and his crew, the nearby Queen Square, where many of these dramas played out on land, still features some of the pubs and taverns said to be frequented by these folks.

As the Industrial Revolution continued through the 18th and into the 19th Century, the thriving city of Bristol benefited from some of the most cutting edge engineering of its time. Besides famous pirates, Bristol has also been the birthplace of one England’s most esteemed engineers. Isambard Kingdom Brunel was born in 1806 and one of the structures that he is most famous for is the iconic Clifton Suspension Bridge, which spans the River Avon and connect Clifton in the city to Leigh Woods. From your hot air balloon, you can explore the wrought iron structure and soar over the canopy of these lush woodlands as you head out over north Somerset and the countryside beyond.

Brunel is also famous for his involvement in the ship building that put Bristol on the map as a commercial shipping centre. Brunel’s first ship, the Great Western, was the longest in the world at the time, measuring 72 meters. Its maiden voyage left Bristol for New York on 8th April 1838, taking 15 days to cross the Atlantic. Brunel’s second ship, the Great Britain, was launched in 1843 and travelled between Liverpool and New York until it was run aground in Dundrum, County Down. His third ship, intended to sail to from London to Sydney, was called the Great Eastern. Though it never made it to Sydney, it was launched in 1859 and put to use on the line between Southampton and New York. To this day, Brunel’s SS Great Britain can be seen moored in the harbour at Bristol. Along with the Matthew, it is just one more of the historic sites you can expect to encounter on your hot air balloon exploration of the city.

Sailing into the present day

The development of the harbour area led to the creation of the Avonmouth Dock and the Royal Portbury Docks just seven miles from the city centre at the beginning of the 20th Century. The docks and the maritime glory of the city of Bristol have waned since its heyday. Nonetheless, the reinvestment in the area, which has included the installation of a floating harbour, the refurbishment of many glorious ships from Bristol’s history – including, in the 1990s, the former coastal trading vessel Thekla, which was built in Germany in 1959 and now doubles as a nightclub – means that the area is thriving.

As you soar above the area in your hot air balloon, you will see new and trendy bars, clubs and maritime ‘experiences’ replace the warehouses and docks of old. Young and old visitors throng around the harbour, making the most of the unique way that the city has brought Bristol’s maritime history back to life in this cool, rebellious and creative city.