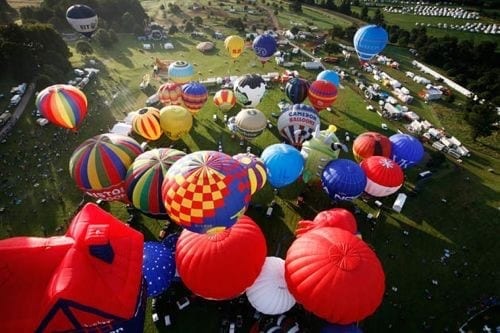 The August Bank Holiday saw the return of the much-anticipated Yorkshire Balloon Fiesta.

Taking place on the city’s Knavesmire, the four-day extravaganza promised fun for all ages, and something a little special to mark the festival’s return after last year’s cancellation.

The event is the largest balloon festival in the north of England, and over four days, visitors were able to see over 50 balloons take to the skies. Some of these balloons were in the UK for the first time, and balloons of all colours and shapes were on site to delight the crowds.

The festival was also accompanied by an array of other attractions. Local radio stations broadcast from the event, which also boasted music by local bands. Night glows delighted crowds the first two evenings, and on Sunday and Monday mass, ascents of the balloons were accompanied by music, fireworks and laser displays.

Throughout the weekend, the fiesta also hosted shows by a local motorbike stunt group, along with bird of prey displays. York’s largest fun fair was also on hand to keep people entertained. Some of proceeds from the weekend were donated to three local charities, so that as many people as possible could benefit from such a large and dynamic event.

Hot air balloons never fail to delight people of all ages. For those in the southwest that want to get a taste of the magic of hot air ballooning for themselves, hot air balloon flights in Bath and Bristol can be had.