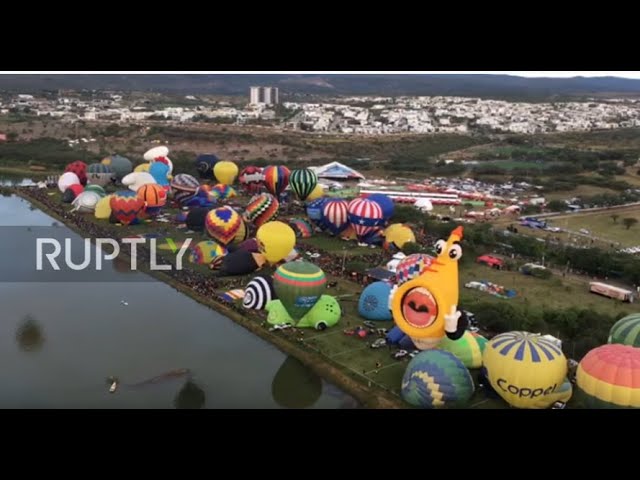 Colourful balloons of all forms and sizes filled the skies over the Mexican city of Leon on Friday, as the International Balloon Festival celebrated its 18th edition.

The festival, which started in 2002 draws crowds of reportedly over 400,000 people alongside hot air balloon pilots from around the world.

“What I like the most is families getting together and the faces of children when the balloons take off,” said Jesica Bustos, a visitor.

According to organisers, the festival in Leon belongs to the world’s top three events of its kind. The festival will last until November 18.

SOT, Jesica Bustos, Visitor (Spanish): “What I like the most is families getting together and the faces of children when the balloons take off. Being hand in hand with people from all over the world enjoying this incredible experience.”
SOT, Faride Iglesias, Visitor (Spanish): “It is something impressive [about] life and living together for [the] happy moments and that is what I like the most about the festival.”

Faride Iglesias, Visitor (Spanish): “The unicorn, because I really liked the balloon and the truth is that it was the one that represents me. It is the one that I liked the most.”

SOT, Cristian Morales, Visitor (Spanish): “It is quite exciting. I am from another city and it is my first time at the balloon festival. I had to work but it is quite exciting and the truth is that we invite all people to come, from Leon and outside, because you feel that emotion as well as it is very familiar and at night there are concerts for the public and right now during the day it is the take off of the balloons. The magic night that is for everyone.”